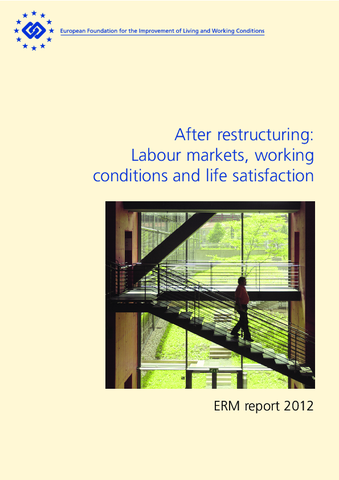 The ERM Report 2012 focuses on the consequences of restructuring for employees. It examines which employees lost their job at the onset of the economic crisis, which of them found a new job and how both job loss and subsequent re-employment impacted on their overall life situation and satisfaction. It also looks at the impact on working conditions for employees who remain at the restructured firm. Both these studies, of those who lost their jobs and those who stayed at the restructured workplace, have never before been analysed by using common, EU-wide and representative, datasets. The report also provides an overview of recent restructuring using the ERM database. While restructuring cases reporting job loss have fallen since the peak of 2009, they still outnumber announcements of job gain. Several recent cases testify to serious problems in the once very promising alternative energy sector in Europe. The findings show that much of the recently announced job creation is in the hotels and retail sectors.