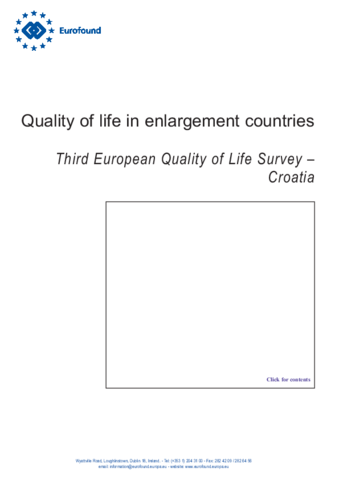 This paper is one in a series on EU enlargement countries covered by the European Quality of Life Survey (EQLS) 2012: Croatia, Iceland, Kosovo, Montenegro, Serbia, Turkey and the former Yugoslav Republic of Macedonia. One way of measuring a society’s progress is by assessing the subjective well-being of its citizens, to complement the more usual economic information such as GDP. This report looks at three subjective well-being measures in Croatia, which joined the European Union in July 2013 as the 28th Member State: life satisfaction, happiness and optimism. On average, people in Croatia rate their life satisfaction at 6.8 on a scale of 1 to 10. This is below the average in the EU27 (7.1), where life satisfaction levels range from 5.5 in Bulgaria to 8.4 in Denmark. See also related content for an Introduction to this series of reports.
Useful? Interesting? Tell us what you think. Hide comments