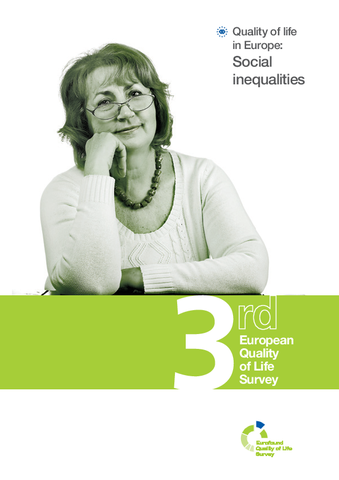 This report examines social inequalities in the distribution of freedoms and opportunities among individuals and population subgroups in Europe. Using data from the European Quality of Life Survey (EQLS), the report builds up an evidence base on social inequalities in four critical areas of life: health, standard of living, productive and valued activities, and individual, family and social life. It examines the role of important determinants of social inequalities including gender, age, disability status, employment status and citizenship status, as well as other drivers. The report finds that, in some instances, there is evidence of disadvantages becoming more prevalent and social inequalities widening between the second wave of the EQLS in 2007 and the third wave in 2011. It recommends that growing policy attention to the multidimensional aspects of well-being be coupled with effective public action to address social inequalities and integrated into general policies at the European and Member State levels.
Useful? Interesting? Tell us what you think. Hide comments