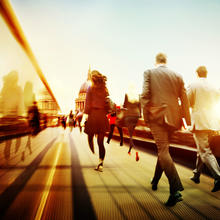 The gender employment gap in the EU has narrowed by 2 percentage points since the global economic crisis erupted in 2008; by mid-2015 women formed 46% of the workforce. The decrease is mostly a result of the disproportionate impact of the recession on employment in sectors that employ men predominantly, particularly manufacturing and construction. Employment has grown in predominantly female-employing service sectors, especially health and education, and this also been a factor. With the economic recovery, however, the pattern has changed, and recent employment gains have been more evenly shared between men and women.

An analysis of recent developments in employment in the EU has been published in the annual report of Eurofound’s European Jobs Monitor (EJM), which monitors shifts in employment and the nature of those shifts. Part of this analysis is an examination of employment change according to how job gains or losses are distributed across the pay spectrum. It categorises jobs into five pay categories or quintiles – from lowest-paying (quintile 1) to highest-paying (quintile 5) – and describes the extent of job loss or gain across the quintiles. Figure 1 shows the quintile shifts by gender.

In the upturn, male employment gains have been stronger than female employment gains in the bottom two quintiles, while female gains have been comparatively stronger in the top two quintiles. Lower-paid service jobs, where women have tended to predominate, have contributed considerably to recent employment growth for men. The fastest growing job in 2013–2015 was that of personal service workers in the food and drinks sector, a job in the bottom quintile. Over 200,000 net new jobs were created in this occupation each year, which were more or less equally divided by gender. However, looking at marginal employment change does not give an accurate picture of the distribution of female employment in the EU economy – this is illustrated in Figure 2 below. It shows that women predominate only in the bottom quintile, where they account for over two-thirds of jobs. In the top two quintiles, they account for just over 40% of jobs. Figure 3 illustrates an emerging division between the top quintile and other quintiles regarding employment contract. Full-time, permanent employment increased only in the top quintile; it fell in all other quintiles. Meanwhile, the share of part-time jobs grew across the wage distribution. These shifts indicate a destandardisation of employment in 2011–2015, mainly involving the replacement of full-time work with part-time work. While core employment remains the dominant status, less typical types of employment status are becoming more normalised.

Figure 3: Employment change in the EU by wage quintile and employment status, 2011–2015 If this trend persists, it means that that core employment, with its greater contractual security, career advancement possibilities and full-time earning capacity, will increasingly be a privileged position enjoyed by those in well-paid jobs.

The employment status of workers varies widely across the Member States. In 2015, only one in three workers in the Netherlands had a full-time, permanent job – over half of the Dutch workforce works part time and an increasing share are self-employed. By contrast, in Bulgaria and the Baltic states, around four out of five workers have core employment status. The incidence of part-time work tends to be much lower in eastern European Member States.

Part-time grew especially strongly in Germany over 2011–2015, where some 28% of workers now work part time. But it has also grown in Greece and Spain despite large overall declines in the workforces of both these countries. These declines mainly affected full-time, permanent employment, with secondary impacts on the large shares of temporary workers in Spain and of self-employed workers in Greece. In the UK, a greater share of overall employment growth occurred in core employment, while self-employment grew at a similar rate to part-time work.