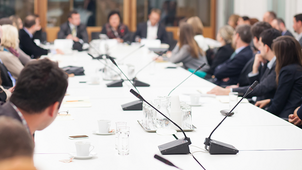 Two years after the start of the COVID-19 pandemic, social dialogue continues to make a significant contribution to helping economies recover. Managing the crisis led many governments to rely on tripartite social dialogue to develop the policies that would mitigate the negative impact of the pandemic on the economy and the labour market. This was borne out by the intensification of activities by national social dialogue institutions and by the agreements signed in many countries. In 2021, tripartite social dialogue shifted its focus from crisis mitigation measures to recovery and issues such as minimum wages and the green transition. Collective bargaining shows strong signs of recovery from the impact of the pandemic. In most countries, the number of collective agreements signed increased during 2021 but without reaching pre-crisis levels. Moreover, issues related to the COVID-19 crisis are lessening in importance in collective agreements compared to more traditional topics. The issue of wage increases in a context of growing inflation is becoming a major challenge for the next rounds of negotiations.

Role of tripartite social dialogue in the recovery

During 2021, there were no major deviations from developments in tripartite social dialogue from the previous year of the COVID-19 crisis, with patterns indicating an intensification of pre-pandemic trends and practices. With few exceptions, in those countries with weak traditions and institutions of tripartite social dialogue, the pandemic did not lead to a revitalisation of the process and in some cases led to further side-lining of social dialogue and the social partners. By contrast, in countries with strong traditions and institutions of tripartite social dialogue, the social partners and governments leaned more heavily on this process to find innovative and sustainable policy solutions to the challenges posed by the pandemic and its social and economic consequences.

Where tripartite social dialogue was weak in 2021

Where tripartite social dialogue strengthened in 2021

In other Member States, tripartite social dialogue remained important or even strengthened as a result of the COVID-19 crisis and recovery policies – Austria, Belgium and Denmark, which have strong traditions of bipartite or tripartite social dialogue, are examples. Since the outbreak of COVID-19, Danish actors have concluded 21 tripartite agreements (7 during 2021), most of them related to the pandemic, which is a substantial increase compared to pre-pandemic levels. Similarly in Norway, central tripartite cooperation was a vital input to policymaking. Other countries experienced a revitalisation, such as Ireland, where the prime minister made a clear commitment to social dialogue, as demonstrated by the meetings with the social partners that took place under the auspices of the Social Dialogue Unit of the prime minister’s department. Moreover, the main employer organisation agreed to participate in a special task force set up by the social partners’ Labour Employer Economic Forum (LEEF). This task force is charged with a range of related tasks, including an examination of how collective bargaining might be developed in a way that is consistent with Irish business competitiveness. The involvement of the main employer organisation, trade unions and government in such a forum is seen as a significant development.

National social dialogue institutions intensified their activities in some countries during 2021. In Lithuania, the activity of the Tripartite Council of the Republic increased. In Poland, despite the ineffectiveness of cross-sectoral tripartite social dialogue, more than 30 meetings of various sectoral tripartite committees took place, a significant ramp up compared to the 6 held in 2020. An intensification of social dialogue was also observed in Slovakia, where 11 meetings of the tripartite Economic and Social Council were held; this compares to 2 in 2020.

From crisis to recovery and return to traditional topics

In Croatia and Slovakia, the negotiation and implementation of national recovery and resilience plans (NRRPs) opened up opportunities to promote the involvement of the social partners and other actors from civil society. In Italy, social dialogue at cross-sectoral level intensified during 2021 in the context of the preparation and implementation of the NRRP. The Permanent Panel on Social Partnership was set up to promote this involvement, though trade unions expressed their preference for a more stable setting for their participation. In Portugal, Slovakia and Spain, the NRRPs have also played an important role in tripartite social dialogue processes.

Social dialogue in Spain has maintained momentum since 2019 and led to several agreements in 2021, including the two tripartite agreements for the protection of employment, which contributed to the extension of temporary lay-off schemes until February 2022 and the bipartite agreement for out-of-court conflict resolution in April 2021. Moreover, in December 2021, after several weeks of negotiations, the social partners and the government signed a major reform of the labour market and collective bargaining that aims to reduce temporary contracts and overcome some of the impacts of the 2012 labour market reform.

Bipartite social dialogue has played two main roles: firstly, complementing tripartite social dialogue by varying the geometry in social dialogue processes, and, secondly, acting as a mechanism to manage the labour market and industrial relations. These roles became even more important during the COVID-19 crisis in dealing with issues like the implementation of short-time working schemes and health and safety regulations at company level.

As a complement to tripartite social dialogue, the topics discussed vary greatly across Member States. In the case of France, due to dissatisfaction with tripartite dialogue, the social partners have tried to strengthen bipartite social dialogue and started negotiations on modernising the approach to joint action by the social partners ( modernisation du paritarisme) – an economic and social agenda different from the government’s. More specifically, the social partners have agreed to strengthen the functioning of those institutions and policies under the responsibility of employer organisations and trade unions and to review the activity of the social partners in these instances. In Malta, bipartite social dialogue has allowed the social partners to find solutions to conflicts arising on issues linked to the pandemic, such as the dispute with doctors over working time and pay and with teachers in relation to the reopening of schools. In Bulgaria, new forms of bipartite social dialogue emerged during 2021. These included discussions and agreements or memoranda on specific issues, including the pandemic, digitalisation, employee qualifications and the European Green Deal and its impact on the labour market. In Luxembourg, the Trade Union Confederation of Luxembourg (OGBL) and the Confederation of Christian Unions in Luxembourg (LCGB) negotiated two intersectoral agreements with the employer organisation Union des Entreprises Luxembourgeoises (UEL) in late 2020 and 2021 concerning telework and the right to disconnect.

In the Nordic countries, bipartite social dialogue was a key mechanism to govern the labour market and industrial relations. In Sweden, the main social dialogue process in 2021 revolved around negotiations regarding the agreement on the Employment Protection Act. This agreement by the social partners will be the basis for legal amendments. The changes are expected to enter into force in October 2022. In Norway, stronger bipartite social dialogue at local and workplace levels has been considered key in facilitating the adjustment of companies to the challenges posed by the pandemic. In Greece, the National General Collective Labour Agreement (EGSSE) was negotiated and signed among the national partners in 2021. This agreement has allowed them to adopt, among other things, the European Social Partners Framework Agreement on Digitalisation, signed by the European social partners (2020). It has also led to the establishment of a joint working group on digital skills and employment to address issues like the right to disconnect, compliance with the rules governing working hours, telework and mobile work.

In 2021, several countries registered a marked increase in the number of collective agreements concluded. In Ireland, local pay bargaining in the private sector and commercial semi-state companies made a partial recovery during the year, with a total of 81 pay settlement deals over the first 9 months of 2021, compared with just 64 deals for the 12 months of 2020 (and 149 deals for the 12 months of 2019). A similar situation was reported for Cyprus, Greece, Italy, Lithuania, Portugal, Slovakia and Spain, where there was an increase in collective agreements in 2021 but still below pre-pandemic levels. Moreover, in order to prevent the emergence of gaps in collective bargaining coverage, the Portuguese government took an exceptional measure suspending the deadlines concerning the survival and expiry of collective agreements for a period of 24 months. Luxembourg and the Netherlands also saw an increase in collective agreements compared to pre-pandemic levels, but the number of agreements varies across years and no specific trend can be determined.

COVID-19-related clauses in general became less prominent in collective agreements over 2021. However, there were still some discussions around them. The German Metal Workers’ Union (IG Metall) and the Association of the Metal and Electrical Industry in North Rhine-Westphalia (Metall NRW) agreed on a one-off payment (worth €500) in June 2021 to help employees deal with the financial challenges of the COVID-19 pandemic. Similarly, the Irish government announced that it would recognise frontline healthcare workers for the extraordinary contribution they had made during the pandemic, noting that it also wished to acknowledge the role of some key private sector workers in the process. This would be done via consultation with the social partners (via LEEF).

Challenges ahead for social dialogue and collective bargaining

One of the issues that had started to come to the fore in collective bargaining in 2021 was wage increases linked to inflation. Despite moderate wage increases negotiated in the context of the crisis and uncertain recovery, rising inflation triggered by higher energy prices is eroding purchasing power, which is beginning to create some tensions among the social partners in collective bargaining. In the Netherlands, disagreements have arisen in relation to this issue: while the trade unions are demanding higher wages, the employers are highlighting the problems several sectors are facing, including the phasing out of support measures. In Bulgaria, too, inflation is aggravating the confrontation between the employers and the trade unions around issues like the purchasing power of wages.

In other countries, longstanding issues and trends are back in the bargaining process and in some cases are expected to create conflicts between the social partners. This is the case in Italy, where the number of decentralised collective agreements has increased. Likewise in Finland, where the shift towards a more decentralised bargaining system, away from the sectoral to the local and company levels, has already started in the forestry industry and threatens to extend to other sectors and create social unrest during the 2021–2022 bargaining round.