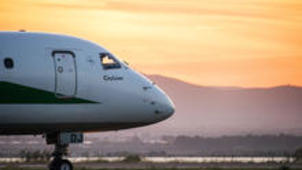 Alitalia has had a difficult commercial history since its privatisation in 2008. In common with other flag-carrying airlines, it has suffered from low-cost competition in its home market and has not invested sufficiently in the more profitable long-haul routes such as Milan to New York, where it has faced strong competition from Emirates. The national carrier’s share of its home market has fallen from 23% in 2007 to 18% in 2015. Ryanair now holds the largest share of the Italian market, with 23%.

Etihad took a 49% shareholding in Alitalia in 2014, with hopes of revitalising the troubled airline. In March 2017, Alitalia announced that a total of 2,037 jobs would be cut by the end of 2019 in order to stem operating losses. This was seen as drastic but a necessary part of a plan to revise the airline’s business model and improve strategic partnerships with other airlines. The job cuts were planned across all the airline’s activities, affecting ground staff, flight attendants and pilots. This was the latest in a line of collective dismissals, previous waves of job cuts having taken place in 2014 and 2015. Trade unions staged angry protests against the plans, organising strike action and calling for the package to be revised in order to avoid job cuts. A deal was subsequently negotiated with the airline’s trade unions, reducing the proposed job cuts and cutting wages by 8% (instead of the originally proposed cuts of up to 30%). However, Alitalia’s workforce rejected the deal in early May by a 67% majority, and the airline entered into bankruptcy proceedings.

The future is now unclear for Alitalia. It could be restructured, sold or completely wound up. The Italian government has appointed three commissioners to assess whether the airline can be restructured, either as a standalone company or through a partial or total sale, or else liquidated. The Italian government has stated that the airline will continue to operate, although state aid restrictions will make it difficult for Italy to continue state support, and nationalisation has been ruled out. Alitalia is reported to have already received around €7 billion of public money over the past decade. Other creditors are refusing to lend the airline any more money.

In the short term, and mindful of the upcoming election, due by May 2018 at the latest, the government has offered the airline a €600 million bridging loan to allow it to continue to operate for a further six months. Time will tell whether one of Europe’s large standalone national carriers will live to fight another day, or whether it will suffer a fate similar to that of Swissair and Sabena.