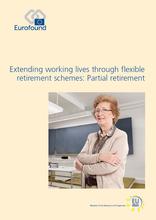 Partial retirement schemes can be an important part of the solution to improving sustainability of Europe’s pension systems. However, despite their clear potential, the practical experiences of partial retirement have shown mixed results, according to Eurofound's new report released today.

A number of reforms have been brought in across the EU to improve the sustainability of pension schemes, involving changes to both state and occupational pension schemes. However, these reforms come with challenges. Freezing and reducing pension benefits have decreased adequacy, and increased contributions have put pressure on disposable income and wage costs. These measures have often proved unpopular. The net benefits of discouraging early retirement and increasing the pension age have also been limited, with workers unable or unmotivated to work until the statutory pension age. Partial retirement can potentially provide new impetus, with about two-thirds of EU citizens saying that this option appeals more to them than to fully retire.

However, the practical experiences of partial retirement analysed by Eurofound have shown mixed results. Partial retirement enables the extension of working lives for some people, in particular many of those with health problems, disabilities, care responsibilities and physically or mentally demanding jobs. However, for many workers, the reduction of hours facilitated by early retirement often outweighs the increase in hours from extending their working lives. Workers who can benefit from partial retirement need to be made more aware of the schemes, and partial retirement should certainly be presented as a more attractive option than early retirement. Such schemes can meet individual need or preference to reduce working time, while retaining adequate income. However, continued full-time employment should be encouraged and supported as the best option.

Eurofound's report looks at the development of partial retirement schemes in the EU and Norway, with more detailed analysis in seven Member States.